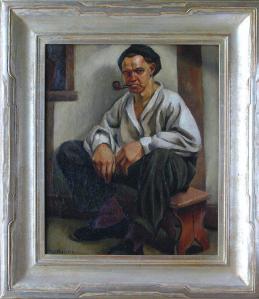 The following was submitted February 2005 by Jayne Oldfield Blatchly, daughter of the artist and trustee of the Otis Oldfield Estate and Archives.

Born in Sacramento, California, third child of the master grainer for the Southern Pacific Railroad, Otis Oldfield left school in 1906 to apprentice at a local print shop. Next he job-hopped on the railroads from Nevada to Montana and Idaho. He then enrolled in Best’s Art School, San Francisco in 1909, working nights as a bellhop at the Argonaut Hotel and the Cliff House.

He sailed for France in 1911, where in Paris he attended Academie Julian until 1913. In France during the World War I, he learned bookbinding while residing in Bouffemont. By 1919, he was back in Paris living in his studio at 70 Rue de Rochechouart and had started showing at the Salon d’Automne. His work received American as well as French recognition. In 1923 and 1924 he exhibited at the Societe des Artistes Independants.
He returned to the U.S. in 1924, briefly staying in his studio at Sacramento until he established himself at the “Monkey Block” in San Francisco. After offering small private studio classes throughout that year he was hired to teach a class called Painting in the Modern Manner at the California School of Fine Arts.

In 1925, he had two one-man shows at the Galerie Beaux Arts and was awarded the Gold Medal for Graphic Arts by the San Francisco Art Association. In 1926 he married, moved to Telegraph Hill and had his first child. He became a full professor on the staff of the California School of Fine Arts and had another one-man show at the Galerie Beaux Arts of his new California landscapes.
In 1929 he had his first one-man exhibit at the Montross Gallery in New York followed by another at the end of that year. In 1930, he decorated the Bar Windows on the top floor at the new Pacific Stock Exchange Club and had a third one man show at the Montross Gallery in New York. This was followed by solo exhibits at the Harriman, Lambertson-Brownell and Down-Town Galleries there.
In 1931, he had a one-man show at the Galerie Beaux Arts featuring a group of new marine watercolors made during a trip on the codfishing schooner “Louise”. He was included in the Exhibition of American Art at the Whitney Museum in New York in 1933. He went on to win First Prize at the California State Fair in 1934 for his painting titled “Figure”.. In that year he was also appointed as one of the W.P.A. muralists to decorate Coit Tower. He had a major solo exhibit at the San Francisco Museum of Art in 1936 and also at the Art Center. The year rendered the first showing of the W.P.A. appointed lithograph series Building the Bay Bridge, at the M.H. deYoung Memorial Museum.

In 1938 his paintings showed a bold and vivid, frankly impressionistic change of style, which upset critics in spite of the award in 1939 from the San Francisco Art Association of the Parilia Prize to his new invigorated work. He was awarded the Governor Olsen Medal when “Figure” was chosen from among 350 American works for a year’s exhibit at the 1939 Golden Gate International Exposition. At the end of the war, he designed Welcome Home decorations for the San Francisco Port of Embarkation docks after working as a draftsman at Fort Mason for the duration.

In 1946, he became assistant professor of painting and drawing at the California College of Arts and Crafts in Oakland. This year he purchased his first summer home in the Sierra’s Gold Country at Gold Run. In 1960 he moved close by to a cabin in the woods at Alta. He spent many hours making on-site paintings in the wild mountainous surroundings of these historic landscapes.

Otis Oldfield retired from his college teaching career in 1952. He continued teaching several evening classes in his home studio for seventeen more years, during which he often painted miniature still lifes with oil on paper. His larger works were developing an imaginative visionary aspect.

He died in 1969, just as the printing of the limited edition of “Louise, a Pictorial Journal” was completed by the Grabhorn Hoyem Press. There was a solo memorial exhibition at the Lucien Labaudt Art Gallery in 1971 and a retrospective one-man show at the Charles Campbell Gallery in 1976.

In 1927, Otis Oldfield became a charter member of the California Guild of Book Binders and was also a member of the Artist’s Council of the San Francisco Art Association for fifteen years. He was an artist member of the Family Club for thirty years and was elected to membership by the Federation of Western Artists in Los Angeles during the 1930s.

His works on paper are in the Achenbach Foundation of the California Palace of the Legion of Honor, the Brooklyn Museum of New York and the W.L. Smith Memorial Gallery at Shasta State Historical Park. The Oakland Museum owns many works, including the entire set of W.P.A. lithographs on permanent loan from the M.H. deYoung Memorial Museum and his most famous painting “Figure”. The Harrison Museum of Art at Utah State University owns an oil painting of the San Francisco waterfront. The National Museum of American Art and the Library of Congress in Washington D.C. maintain lithographs from the Building the Bay Bridge series as well as entries for many of the W.P.A. mural projects in their permanent collections.

The Coit Tower Mural, Shipping Activities Inside the Golden Gate and the City Club of San Francisco Bar Windows (formerly Stock Exchange Club), Sporting Activities, can be seen during visiting hours regularly.
Biographical materials are available on microfilm at the Archives of American Art in Golden Gate Park. Of note also is the W.P.A. monograph: “California Art Research” (through 1937) and Yvonne Greer Thiel’s book: “Artists and People” (through 1959). Inkwell Publishing produced a 104 page halftone illustrated catalog (through 1990): “Otis Oldfield, Centennial Exhibit”
Otis Oldfield is featured in Ruth Westphal’s 1991 book “American Scene Painting – California 1930’s and 1940’s”.
The K.C.O.E.-TV Foundation used Oldfield’s Self Portrait – 1933 in a 1996 video: Impressions of California..
Recently Oldfield’s work has been included in the exhibitions “California Dreamin’ ” at the Fresno Museum, 1992; “Facing Eden” at the M.H. de Young Memorial Museum, 1995; “California Progressives” at the Orange County Museum of Art, 1996-97; “Picturing California’s Other Landscape” at the Haggin Museum in Stockton, 1999; and “Made in California”, at the Los Angeles County Museum of Art in 2000. Five works hung in the George Krevsky Gallery’s “California Regionalism” exhibit in 2002.

In 2004, Oldfield was included in “California Modernist Works on Paper” and in 2005, “The Figure in California Modernism” at the Spencer Jon Helfen Gallery in Beverly Hills. Oldfield’s portrait “Yun Gee” was purchased from the exhibit by the Los Angeles County Museum of Art for its permanent collection.
Periodical Reference: Raymond Wilson, ‘Otis Oldfield, A Painter for His Times’, “Antiques and Fine Art 1990”.