You can’t make up anything anymore. The world itself is a satire.
All you’re doing is recording it.
– Art Buchwald, American political satirist and Washington Post columnist (1925–2007). 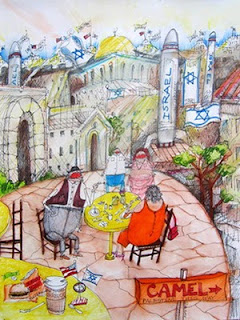 Suzanne Klotz’s work draws from personal experience – she has witnessed the effects of military aggression on the families of both Palestinians and Israelis. Between 1990 and 1995, she was a repeated guest artist of Mishkenot Sha’ananim, a non-governmental International Cultural Centre in Jerusalem. Much of her time was spent in the West Bank and Israel, facilitating collaborative exchanges between Palestinian and Israeli artists, educators, and professionals, culminating in a landmark group exhibit at the Municipal Gallery in Jerusalem. She has been an eyewitness to events in the region only to see them misrepresented in the American media, and thus feels strongly that it is important for people to personally investigate truth in distant lands as well as in their own back yards. Her use of familiar household materials deliberately personalizes some of the ‘unseen’ aspects of war and questions the effects of military occupation not only on the forces involved but also on the family dynamics of society at large.
The book publication and exhibition title, Family Ties Occupied Art, implies that the foundation of a society is in the strength of its family bonds, which comprise the strength of the community, and by extension, the strength of a nation is dependent on its ability to interact with other nations. The larger implications regard the greater human family to which we all belong, and thus we are all implicated here. From the nursery rhymes we sing as children, to the Proud To Be American t-shirts and hats we wear, to the foreign-made products we buy, the taxes we pay and the gas burned on family trips–we are all in this together for better or for worse!
Dorothea Barhoni
Independent Writer/Curator