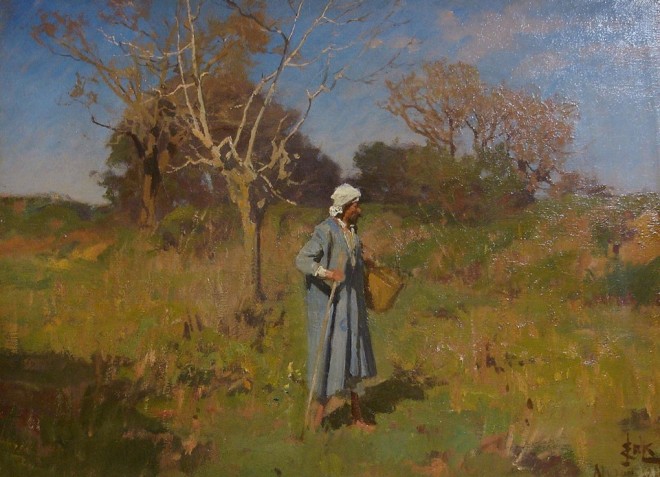 Pupil of A. Hellesen and C.V Nielsen. Educated at the royal Academy of arts in 1873. Henningsen was one of the leading artists in Danish naturalism during the 1880ties. Together with the artists Holger Drachmann and Christian Krohg, Henningsen changed the Romanism in art and chose his motifs and scenes as if he was reporting for a newspaper. Henningen works often depictured grim realism like paupers being thrown our of their homes, trial scenes with murders and other sad situations in the human life. Henningsen wanted to be objective in his works and used great effort to depict each situation as accurate as possible.
This let Henningsen to work with a new point of view that made the audience feel they participated in his works. For example: Flower shop scene seen from the florists point of view. This new angle often caused great debate since the works changed from being a piece of art into a manner of provocation. The works encouraged ideas and action instead of just being something pretty to behold. Henningesen worked primarily in Scandinavia but he also traveled and worked in Germany, Italy, France and the Nederland’s from 1892. Exhibitions: Charlottenborg: 1879-1931. – International Art Exhibition, Wienna:1882. – The world fair in Paris: 1889. – International Art exhibition, Berlin: 1892. – Munich: 1892. – Nord Art Exhibition, Lübech: 1895. – City Hall: 1901. – Glaspalast, Munich: 1909. – Gallery Bergenholz: 1922-1923. – The national gallery of arts, Copenhagen: 1930, 1961.
Ref. Josephine Rydeng

Biography
Erik Henningsen was born on 29 August 1855 in Copenhagen to Frants Ludvig Henningsen (1820–1869), a grocer, and Hilda Charlotte Christine née Schou (1824–1880). He showed an early artistic talent and was articled to decorative painter A. Hellesen. He also took drawing lessons privately with C. V. Nielsen and was admitted to the Royal Danish Academy of Fine Arts in 1873. He graduated in 1877 and won several awards and distinctions, including the Academy’s Annual Medal in 1887 and 1890, the Ancher Prize in 1889, and in 1892 a travel scholarship of DKK 100.
His travels took him to Germany, Italy, France and the Netherlands.
Artistic career.

A meeting at Bogstaveligheden on 1 March 1882, drawing by Henningsen from 1910
Henningsen became part of the group Bogstaveligheden, a forum for the Realists’ humanitarian ideals about creating a better society through illumination and debate.[1]
In his paintings from the 1880s and 1890s, Henningsen was preoccupied with the rights and living conditions of groups such as the unemployed, women, workers, children and the elderly. Examples are Summum jus, summa injuria. The infantcide (1886, The Hirschsprung Collection and Evicted (1892, Danish National Gallery).
He also depicted the lighter aspects of human life, as in his paintings of street life in Copenhagen.

Henningsen’s mural in the aula of the University of Copenhagen: H. C. Ørsted, the president of the meeting, is speaking. Other people seen in the picture are Christopher Hansteen standing in front of him, and Japetus Steenstrup standing to the left
Towards the turn of the centory Henningsen mainly painted historical scenes. An example is his mural in the banquet hall of the University of Copenhagen’s main building on Vor Frue Plads in Copenhagen. It depicts the banquet at the Scandinavian Scientist Conference held in Roskilde in 1847. It completed a series of murals depicteding the history of the university of which the earlier painting had been created by Vilhelm Marstrand, Carl Bloch and Vilhelm Rosenstand.[2]
During the two first decades of the 20th century he mainly painted genre works from the lives of the bourgoisie.[3]
Illustrations and decorative works.

Tuborg poster. The Thirsty Man, 1900
Henningsen also worked as an illustrator, both for the weekly magazine Ude og Hjemme and books such as Pietro Krohns Peters Jul (1914).
In 1900, the Tuborg Breweries announced a competition for a “decorative advertisement poster” to mark its 25 years jubilee. The first prize, which was rewarded with a sum of DKK 10,000, was taken by Jens Ferdinand Willumsen, but it was ultimately Henningsen’s entry, known as The Thirsty Man, which was put into production by the brewery. It has since obtained iconic status and become one of the most immediately recognizable posters in Denmark.[4] 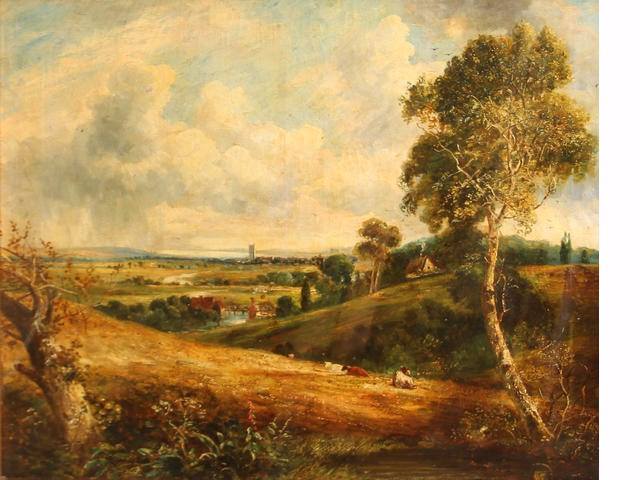 John Constable was the first English painter to paint directly from nature in the open air, and the first to paint foliage really green. He was a painter whose brush seems to have responded with a perception of its own in accord with the artist’s mood. There is an evident difference between the early years of search and fulfillment, when he painted in a happy mood, and the later years of his life when the same motifs were reinterpreted in slashing brushwork in his years of despondency following the death of his wife, Maria. He suffered from much insecurity during the years of struggle for recognition. He became both rich and famous, without serious money problems, but he became more withdrawn, pessimistic and racked with doubts as to his achievements, while producing some of his finest work.

Constable was born in 1776 in the Suffolk village of East Bergholt, where his father owned water mills on the River Stour. He lived a life of blameless bourgeois obscurity, alternating between London and the Suffolk countryside. He spent years of inconclusive study at the Royal Academy. At thirty-three, Constable fell in love with Maria Bicknell who was twenty-one. Her grandfather so strongly objected to her marrying an artist with no promising future that they were forced to postpone the wedding for six years. Maria died at forty of pulmonary tuberculosis, having borne seven children after difficult pregnancies during a period of ten years of increasing invalidism.

Constable was a doting father, frequently taking the children on vacations. The seven children remain rather vague figures except for the eldest, John, a moody youth who shared his father’s love of nature and was so distressed by his father’s death, when young John was twenty, that he could not attend the funeral. John then entered Cambridge to read theology, but died of scarlet fever in 1841, a disease that had already claimed Constable’s daughter Emily in 1839 at the age of fourteen. In 1853, another son, Alfred, drowned in the Thames. Another son, Charles, became a sailor in his early teens, traveling to India and China. The eldest daughter, named for Maria, but called Minna, did her best as head of the small orphanage that her father left behind.

Constable failed to gain full recognition in the Royal Academy, in spite of his efforts to play the necessary political games. His frustration turned to resentment and criticism when a few weeks after Maria’s death he was elected Royal Academician. Her death completely shattered him and he wore mourning for the nine remaining years of his life. But the paintings he produced at that period were among his best. The 18th century was an age of romanticism, which the English found in landscape and seascape that were more personalized than any of their time. Constable felt no need to travel; there was in the area around him enough drama to last forever. Mood and climate were one with him.

Constable was of course only incidentally a water colorist, and the majority of his works in this medium are notes, brilliant in execution but intended only for future reference in the composition of oil paintings. It is incomprehensible that his genius can have been so neglected in his own time. Had he not had independent means, it would have been impossible for him to devote his energies to the landscape painting which revolutionized the visual habits of Europe.

Constable always lived under the artistic shadow of J.M.W. Turner, who was almost his own age, but far more successful in contemporary eyes.

Sidney Jonas Budnick (June 18, 1921 – August 25, 1994) was an American abstract artist. He was born and raised in New York City where he developed a passion for art early in his life.
While living in New York Sidney Budnick met the Dutch artist Piet Mondrian. He was greatly influenced by Mondrian’s work and the De Stijl art movement. He studied under Hans Hofmann, an abstract expressionist artist and teacher, and was friends with Harry Holtzman and Carl Holty, founders of the American Abstract Artists group.[1]
Sidney Budnick also was encouraged by Hilla Rebay, the artistic advisor for Solomon R. Guggenheim. In 1939 Guggenheim and Rebay opened the Museum of Non-objective Painting, later named the Solomon R. Guggenheim Museum. Rebay supported many artist, including Sidney Budnick, by hiring them as support staff at the museum.[2] Some of Sidney Budnick’s early work is classified with other works of the Museum of Non-objective Painting.[3][4]

Later work exhibited at the Portland Lawrence Gallery [5] in 2008
After serving in the army during World War II, Sidney Budnick earned his Bachelor of Art degree at the IIT Institute of Design. While there he studied under László Moholy-Nagy, the founding director of the New Bauhaus and head of the School of Design (renamed the Institute of Design in 1944).[6]
In 1952 he completed his Master in Architecture at the Harvard Graduate School of Design studying under Walter Gropius, the founder of the Bauhaus school in Germany.
Sidney Budnick was an architect for the Department of Parks and Recreation for the State of California for many years.
Although Sidney Budnick earned his living as an architect in California, supporting his wife and three children, he painted throughout his life until he died in 1994 in Oregon.
Sidney Budnick’s work was included in an exhibition organized by Katherine Kuh[7] at the Art Institute of Chicago in 1948, entitled, “American Abstract and Surrealist Art.” His work is included in the collections of the Guggenheim Museum,
Museum of Modern Art and the J. Donald Nichols collection, Farhat Art Museum .
Source:
http://en.wikipedia.org/wiki/Sidney_Jonas_Budnick 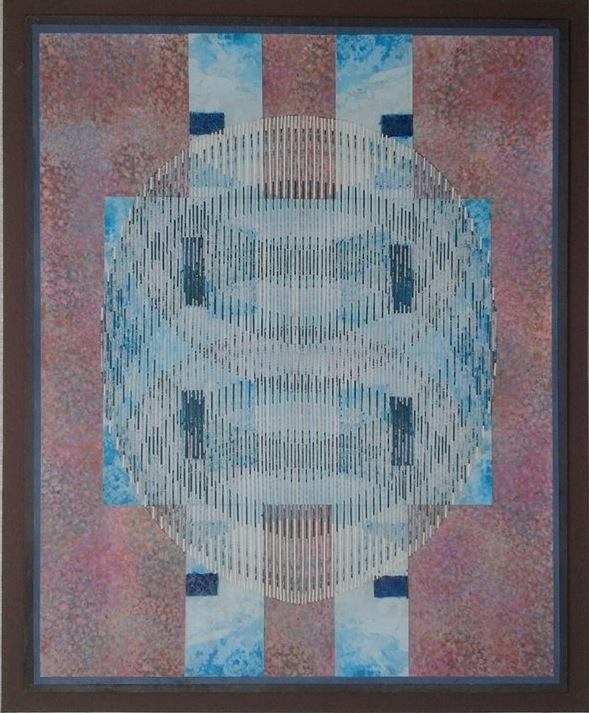 Mix media on board
Measures 22×18
signed on the back
Titled: Cosmic Egg
Farhat Art Museum Collection

Artist Eve Tartar (1910-2000) American artist
Carmel Valley resident acclaimed for collages, sculptures and murals
Renowned artist, Eve Tartar, who won acclaim for her paper collages and sculptures and whose work adorns buildings in the Monterey area, died at her Carmel Valley home. She was 89. Born in 1910 in Brooklyn, N.Y., to Russian immigrants, Tartar decided to become an artist when she was in her teens. She began by studying oil painting, and counted Dutch artist Piet Mondrian among her mentors. At first, she painted in the realist style, but after being captivated by a Van Gogh painting, she explored impressionist techniques. Early in her career, she followed her mother into the fashion industry, stocking a boutique on Madison Avenue with her own designs as well as writing a book on fashion and designing costumes for Broadway productions. She was the first American designer to take a collection to Paris after World War II. She first visited Carmel in 1961. She moved to Carmel Valley.” There, she set up a studio and turned her hand to sculpture and collage. Her abstract works, which use paper and wood to explore forms and spatial relationships are displayed in galleries and private collections around the country. Several of her works can be seen on the Peninsula. Her two-ton sculpture, “Genesis” rises four stories high in the atrium of the Spindrift Hotel on Cannery Row. Her murals hang in the Pacific Hotel in Monterey, Congregation Beth Israel in Carmel Valley and at Monterey Peninsula College. Tartar was known for her commitment to her art, her joie de vivre and her strongly held opinions. She enjoyed having friends and artists gather in her home for lively debate. Tartar and her husband were active members of the Monterey Peninsula Society of Friends. She also liked to travel, opening her eyes to art from around the world. “Creativity is the marriage of innocence and skill,” she once said. “It is the courage of exploring what is unknown, of allowing the rising to the top of existence what is submerged below consciousness. It is trusting the unfamiliar into life. It is allowing the mind to trail behind the doing. The creating comes first, and the judgment follows.”
Source:
By Anna Davison / Herald Staff Writer
Copyright (c) 2008 The Monterey County Herald