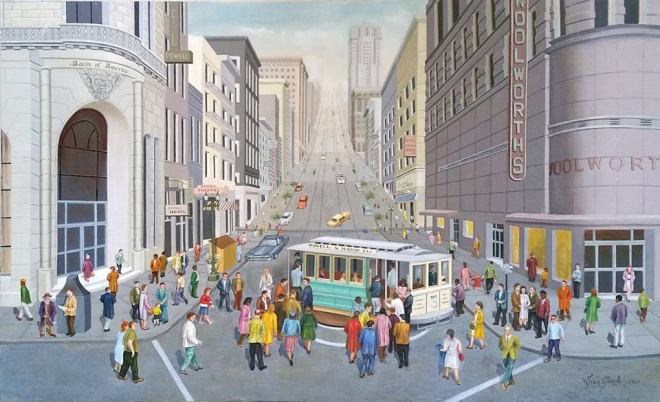 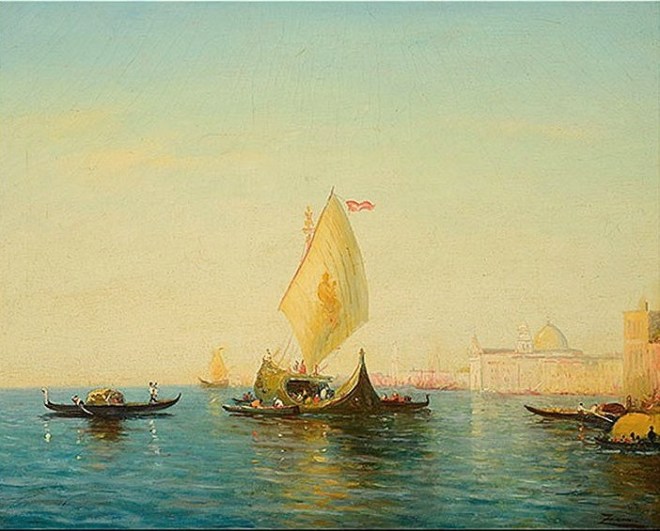 Felix Francois Georges Philibert Ziem (1821-1911) was born in Beaune, France, on the Cote d’Or, in the heart of Burgundy, to a Croatian father and Burgundian mother. He studied at the Ecole d’Architecture de Dijon and for a time was a practicing architect. However, along with painters Guardi and Canaletto, it is the city of Venice to which his name is most closely linked. Venice is the subject of his finest paintings, and composer Frederic Chopin referred to the city as Ziem’s spiritual home. Ziem was well-traveled, visiting Algiers, Austria, Belgium, Constantinople, Egypt, England, Greece, Holland, Russia, and Turkey, but it was to Venice that he repeatedly returned.

He was an active participant in the Paris Salons from 1849 on, and made frequent trips to Barbizon, where he lived in a small circus caravan while painting. After 1888 his paintings show the influence of the Barbizon School’s naturalistic approach, a greater attention to atmosphere and an increasingly impressionist style. Ziem owned houses in Venice, Martigues, Nice (where he wintered), and on rue Lepic in Paris. Among his students was the young English Princess Victoria, later queen of Britain. Ziem assisted less fortunate artists and established charities, among them an asylum for the blind.

He was the recipient of many awards and honors and was made a Chevalier of the Legion of Honor in 1857 and an Officer of that order in 1878. On his death Ziem bequeathed to the city of Paris a number of studies and drawings from his studio. His paintings are found in museum collections throughout Europe as well as in North America.

Karl Momen is a Swedish architect, painter and sculptor. He was born in 1934 in the city of Mashhad, Iran.

Momen is the creator of the Metaphor: The Tree of Utah, an 87-foot (27 m) sculpture resembling a tree in the Bonneville Salt Flats off of Interstate 80. Apparently, while driving along the highway to California, Momen had a vision of a tree in the desert. He financed the project himself and built it from 1982 to 1986, afterwards donating the sculpture to the state of Utah.

The Iranian-born Momen, who painted portraits of Stalin and the Shah of Iran early in his career, later studied with the surrealist painter Max Ernst, and studied architecture at the Kunst Academy in Stuttgart, Germany. It has been said that he was moved to create the 87-foot-tall (27 m) tree by the “vastness and relative emptiness” of the Bonneville Salt Flats, and that the tree “brings space, nature, myth and technology together”. The tree’s six spheres are all coated with natural rock and minerals found within the state of Utah, and the pods below symbolize the changing of the seasons, when trees naturally transform themselves. The costs of building the tree, reportedly over a million dollars, were provided entirely by Momen. The tree now belongs to the State of Utah.